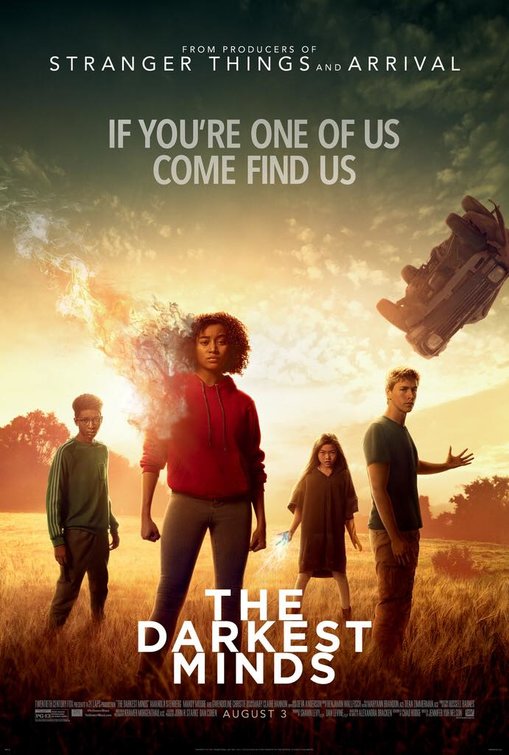 Based upon Alexandra Bracken’s novel of the same name, Jennifer Yuh Nelson’s The Darkest Minds is the latest attempt at a dystopian young adult franchise starter, hoping to follow suit and tap into the same audience that made the Hunger Games series such a massive success. Bracken’s series of novels has proven popular enough to have just seen the release of its fifth chapter.  Unfortunately, it doesn’t appear as if the film franchise will prove as equally lucrative, as Nelson’s movie has its heart in the right place but loses itself in the details.

Tragedy strikes humanity when a sudden and vicious virus manifests in the world’s entire population of children.  A whopping ninety percent of them are sadly killed by the virus.  But the remaining ten percent find themselves imbued with one of a small assortment of special powers.  Governments react with fear, round the children up, and toss them into detainment camps, then color-coding each detainee according to their power (as well as the color their eyes glow when said power is engaged).  Most of the detainees are simply contained and put to work.  But anyone with a red or orange designation – considered the two most dangerous – are killed without question or hesitation.  Young Ruby (Lidya Jewett, Amandla Stenberg) uses her abilities to slip under the radar after receiving the orange designation, but once she is discovered, she goes on the run,  looking for a way to survive a world that has deemed all youth as the enemy.

The Darkest Minds is just the latest property to attempt to tap into that aforementioned young adult bloodline and it’s been tough going in the realm, lately.  The Maze Runner did okay for itself, but others haven’t had such luck.  Even the Divergent series, after getting off to a fairly strong start, lost so much audience support that its finale isn’t even getting a theatrical release – if it ever sees the light of day, at all, that is.  There’s enough going on in the subtext of The Darkest Minds that it feels deeper and easier for me to connect with than most of the other YA adaptations, but its surface qualities are both too derivative and poorly thought-out for it to become the standout that it has the potential to be.

Be aware that I haven’t read any of Bracken’s books, so I have no knowledge of whether some or all of the film’s flaws originated in the source material.  But, when doing any adaptation, it’s the director’s responsibility to put out the best film possible, even if that requires making changes to the movie’s inspiration.  I know people don’t like to hear that, but that doesn’t keep it from being true.  And, under different circumstances, I could have envisioned this film being a solid studio hit and a new, non-comic book franchise.  But it won’t be, despite having plenty going for it.

The film’s biggest windfall is star Amandla Stenberg.  Fans may or may not recognize her name, but she shot to prominence as poor little Rue in The Hunger Games.  It was a small part, but she made a huge impact, connecting with viewers and providing one of the series’s most memorable characters, despite her limited screen time.  Six years later, Stenberg has retained all of the qualities that made her so likeable and relatable in that monster franchise.  Here, as Ruby, Stenberg charms her way into the hearts of the audience as well as the other characters that Ruby comes across (well . . . mostly).  Even though, based on its box office, so far, this film won’t lead directly to a franchise, I hope studios keep casting her because, with the right role, Stenberg is destined to be a star.  And it could be her upcoming film The Hate U Give that gets her there.  We’ll see.

She’s not all the film has going for it, however.  This introduction to the series actually functions on several levels other than the obvious, relating to various current events and sociological issues.  The narrative can function as an allegory for the current administration’s fear of the powerful youth of America.  One can also see clear allusions to conversion therapy woven into the story.  And it even works on a broader level as a reference to society’s fear of anyone different who, in their minds, presents a threat to their comfortable way of life.  In essence, the film is the story of the X-Men if the X-Men skipped that whole bothersome Xavier School for Gifted Youngsters and jumped right to Days of Future Past.

The whole thing builds to a climax that is legitimately thrilling and a final few moments that are genuinely affecting.  It was in these final moments, when I realized how effective the film had been at making me care about the characters, that I became the most frustrated.  Even though Nelson had completely succeeded on an emotional level, there were far too many problems on the creative level for the film to be truly considered artistically meritorious.  One of my biggest issues stems with the film’s title.  Yes, it was the title of the book, and it’s always difficult to change something that prominent, but it’s been done many times and, as a title, The Darkest Minds is unimaginative, generic, and fails to give insight into the content of the story.  It could almost literally be about anything.  A snappier title would have gotten more attention from general audiences and likely would be getting more paying audience members into the theater.

But once they’re there, they still need to be sufficiently excited by the product.  I think, for some, the characters, themes, and emotional resolution would be enough.  But others will get stuck on the similarities to other series.  And they’ll get stuck on narrative oversights.  For example, why are the kids with the powers of telekinesis and electricity control not considered among the most dangerous?  And why are the ones considered to be totally safe – those with heightened intellect (designation: green) considered dangerous, at all?  They’re smart, but they aren’t Reed Richards-smart; they’re normal human-smart.  And why does the green that we come to know, Chubs (Skylan Brooks) not come across as particularly smart?  Yes, he has some solid reasoning skills, but his joking attempts are recycled, ill-timed, and lacking punch.  His vocabulary is unimpressive.  And he generally just sounds like any other typical teenager that one is likely to encounter.

There’s a reference to the #MeToo movement in there, as well, and while I appreciate the intent, it feels forced and it all starts to be a bit much.  Not only that, but it reduces a previously intriguing character to a simplistic meathead manbaby with rather uninteresting motivations.  This person’s whole vibe is already suspicious from the moment we meet them, so it would have been great for the reveal to have been something with some meat on it.

Any one of these issues – or maybe even a couple of them – wouldn’t be too much to conquer on their own (except the issue with the inconsistent threat-level designations of the color-codes.  Being the entire premise, that’s something that would need to be sorted out.).  Together, though, they take an otherwise enjoyable film and saddle it with too much baggage to reasonably overlook.  It’s too bad as I’d be up for future chapters if given the chance to improve.  There are elements of this world that aren’t tackled in this movie that I’m interested in learning about.  If all of the children are contained, what happens to the human race?  Are all future children affected by this virus?  Where did it come from?  Maybe I’ll have to read the books to find out.

That’s what’s so frustrating about this for me.  I’m legitimately intrigued by the premise and I want to see more of Stenberg’s charismatic Ruby.  I’m interested in seeing her story play out.  Unlike in the last movie I reviewed, Ruby is a true hero in her world and someone for young people to look up to and learn from.  But, due to creative missteps, this will probably be all we get of her.  For my personal tastes, the film’s positives – the concept, Stenberg, the finale, the mythology – outweigh the negatives – the logic gaps, the branding, the character motivations, the similarities to other properties.  Overall, I enjoyed the film.  But I can’t in good conscience say that’s a “great” movie.  Objectively speaking, I suppose it’s fine, with enough positives to keep it from being outright bad.  But I think about what it could have been and I just feel sad.