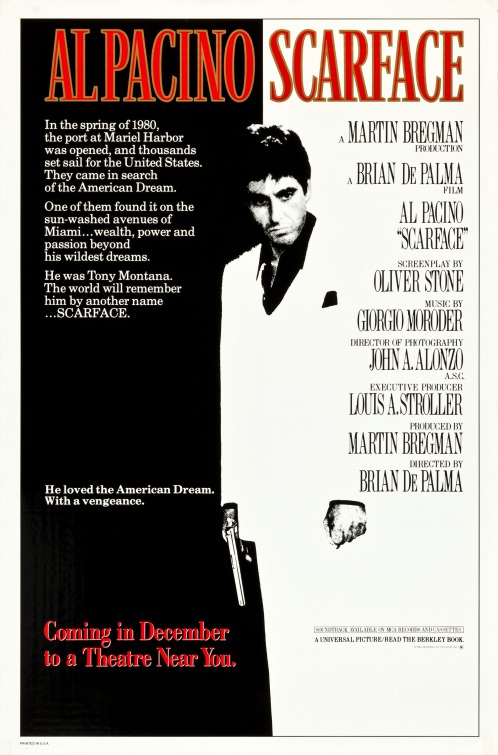 There can be any number of reasons why a given film may go on to live forever in the public consciousness, achieving legendary status.  Sometimes, it’s due to the story.  Sometimes, it’s the property.  Sometimes, a film may represent a giant leap forward for filmmaking, whether technically or creatively.  Or maybe it strikes a cultural chord, resonating with the audience so resolutely that its impact never dissipates.  And then there are those films that are elevated and catapulted into the stratosphere by a single character and a single performance.  And that is the case with Brian De Palma’s epic crime thriller Scarface.

Released just in time for the holidays (naturally) in 1993, Scarface didn’t initially make an especially large splash.  It was financially successful, but not exorbitantly so.  It’s been in the decades since that the film has achieved cult classic status  – maybe even more than that.  After all, who isn’t familiar with Pacino’s famous, “Say hello to my little friend!” line?  The film went on to have several quirky influences on some unexpected people (not only did professional wrestler Scott Hall model his Razor Ramon character on Pacino’s Tony Montana, but Saddam Hussein actually named a money-laundering service after him, too), arguably cemented Pacino as a leading man, and lent credibility to screenwriter Oliver Stone (whose most recent screenwriting credit prior to this film was Conan the Barbarian starring Arnold Schwarzenegger).

The film follows Pacino’s Cuban immigrant Tony Montana as he arrives in Miami, Florida, and immediately aims to make a name for himself in the drug trade.  Montana is motivated by exactly one factor: avarice.  He cares not what must be done to attain the money he so desperately desires, nor does he care how it affects those around him.  Outwardly, he projects that he does; he displays love and affection towards his caring sister Gina (Mary Elizabeth Mastrantonio) and their mother (Miriam Colon).  And he relentlessly pursues Michelle Pfeiffer’s Elvira.  But it’s all an ego-driven facade – as is revealed in his weaker moments.  Montana is the epitome of a psychopath and Pacino seems to delight in embracing that notion.

I’m on the fence on deciding if the film would be decidedly mediocre without Pacino’s charismatic portrayal of Montana or if he simply makes it appear as such by overshadowing everything and everyone else around him.  Pacino is so strongly associated with this film that he’s virtually synonymous with it.  I had even forgotten that Michelle Pfeiffer was in the movie, at all, and I’m a big fan of hers.  And she does a fine job, as does most everyone else involved in the film.  But when one thinks of Scarface, it’s inevitably Pacino who springs to mind, with his ranting, raving, manipulating, and over-reliance on violence as a solution to his problems. 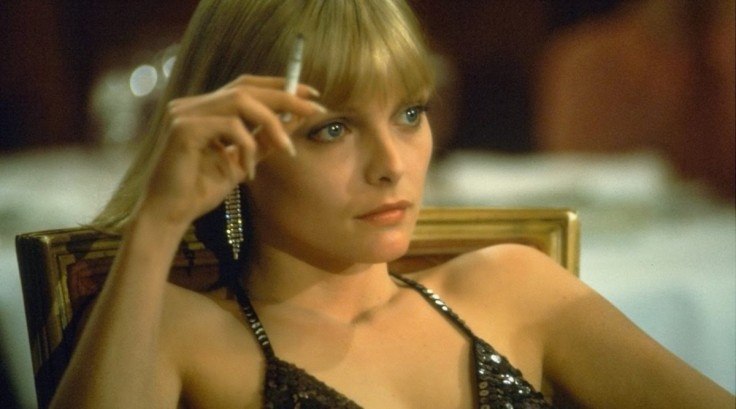 Outside of Pacino’s scene-chewing turn, what’s left is a fairly standard mob film.  For nearly three hours, the movie hands out the typical character archetypes and plot points that all have come to expect from this particular genre.  Character motivations are as they usually tend to be.  The big plot twists are, as well.  The success of the Godfather series opened the floodgates for gangster cinema and it’s rare that one has much to offer in the way of fresh ideas, and that’s even the case, here (it doesn’t help that this film is an adaptation of the 1932 film of the same name).  Although, I do appreciate the attention that Stone and De Palma give to the widespread effect that Montana’s lifestyle has on those around him – those he purports to care about.  There is no audience anchor in the film – someone to whom the average viewer can relate – so this is the next best thing, as we can get a feeling for how those not buried knee-deep in felonious criminal behavior might be influenced by Montana against their own will.

While most of the film is fine – if not exceptional – one aspect jumped out at me as egregiously awful and I just have to mention it.  Giorgio Moroder’s score is among the most ridiculous and discrepant film scores that I have ever had the misfortune of hearing – to the point of distraction.  I understand that the film was released in 1983 and, yes, the score is a product of its time, but I have no problem with that.  In fact, I prefer it; so that’s not my issue.  The problem is that the score is tonally antithetical to the emotional goals of the film.  And this is the case not once, but consistently, all the way through the film.  To make matters worse, Moroder’s score actually garnered a Golden Globe nomination, which is as big an award-nomination misfire as I can recall.

Speaking of awards, for as well-regarded as the film is now, Scarface only garnered three total Golden Globe nominations (with zero wins) and no Academy Award nominations, at all.  In face, De Palma actually earned a Razzie nomination for Worst Director – making it clear that the Razzies have absolutely no credibility, whatsoever, now (as I already explained in detail right here), nor 35 years ago.  So, both financially and critically, the film arrived to moderate enthusiasm, at best, and a whimper, at worst.  It makes a bit of sense.  These characters aren’t exactly a blast to spend three hours with.  And the violence may have turned people off as it could easily be interpreted as glorified.  But, over time, as sensibilities towards on-screen violence softened, audiences began to discover Scarface and, more specifically, Pacino’s performance in the title role.

Without Pacino, the film is just another gangster flick.  But, thanks to Pacino’s wholehearted commitment to Tony Montana, De Palma’s film is regarded as an all-time classic.  I wouldn’t say the picture as a whole is as amazing as many claim it to be, but it’s worth seeing at least once, and Pacino deserves all the press and lip service he’s received as a result of the part, even if it all came too little and too late.