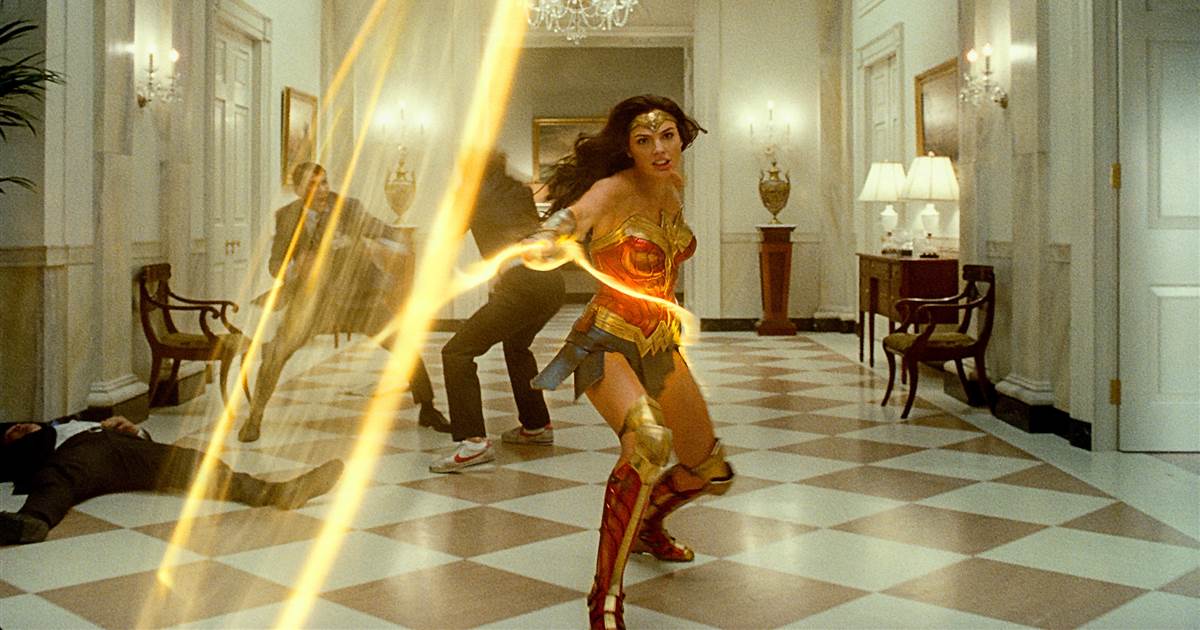 Well, it certainly took much longer for me to come back here than I expected when I wrote this column about the most brilliant film to come along in many many years, US. Since then, I just haven’t felt motivated to put the kind of energy into writing that this sort of post requires. Of course, 2020 didn’t really provide much in the way of potential cinematic muses, thanks to a situation that was entirely out of the studios’ control. But Warner Brothers made a call to give us WONDER WOMAN 1984 on Christmas Day. And what a gift it was.

I made no secret about the fact that the collaboration between director Patty Jenkins and Gal Gadot on 2017’s WONDER WOMAN gave me my favorite solo superhero movie of all-time, if we’re judging purely on top-to-bottom quality. In fact, I loved it so much, that I reviewed it twice (once here and then I had even more to say here). It was in the second column that I declared this version of the character to be the greatest hero in all of film. Upon finishing WONDER WOMAN 1984 on Christmas Day, I knew that this newest film had somehow widened the gap. Gal Gadot’s Wonder Woman is the greatest hero in all of live-action adaptation history and maybe DC’s greatest hero in any medium. And, today, I realized that I needed to discuss it and I needed spoilers to do it. I didn’t feel like that would be okay in a Facebook post, so here I am, back at the Movie March, once again!

So, allow me to repeat that MAJOR SPOILERS LIE AHEAD!!!

A common criticism of characters like Wonder Woman or Superman is that they’re too powerful, as if their ability to win fights is what defines them and/or their worth as characters. WONDER WOMAN 1984 invalidates this criticism, as many other works have done for many other characters before it. But this film does so in a way not seen before that can not be overlooked, lest it make for an irresponsible viewer and perhaps a lesson left unlearned, for this film illustrates a point that virtually everyone in modern society needs to remember not just in these times but directly because of them. In 2017’s WONDER WOMAN, Diana was established as someone who has an undying belief in the good of people. She received a harsh reality check when she was hit with the fact that not all people are inherently good, but she persisted in leaning on the belief that anyone can learn to be and that while people’s actions may mean they don’t necessarily deserve a chance to be better, that didn’t mean they weren’t worth being given the chance, anyway. In the first film, Diana represented hope, just when the real world needed it. In WONDER WOMAN 1984, Diana now has to determine how to take that hope and turn it into something palpable. She has to make it manifest itself from an abstract idea into living proof that people can learn, grow, better themselves, and do good for the world around them, even when it isn’t easy.

That’s her challenge. And she faces the same temptations that everyone else does – not only all of us, but the film’s “villains”, as well, in the form of businessman Maxwell Lord (Pablo Pescal) and Cheetah/Barbara Minerva (Kristen Wiig). I used quotations around “villains” because they aren’t villains in the traditional sense of the word. Both of them are motivated by the pain of their pasts and the desire to better their lives as well as the lives of those who may be in their care, such as Lord’s young son. They aren’t evil. They aren’t out to hurt anyone. They just want to be content, loved, and happy. They want to be worry-free.

That’s what we all want, isn’t it? And we generally do what we need to in order to try to make that happen. I was tempted to finish that sentence with “to a certain extent” but, if I’m honest, that coda wouldn’t apply to everyone. Some people will do literally anything to ensure their own comfort and happiness. Most people, however, will limit themselves to not actively hurting others. But what they often don’t see is that they may be indirectly hurting others or perhaps hurting themselves in ways that aren’t necessarily obvious.

Barbara Minerva is an intelligent, kind, and funny woman, who simply has the misfortune of being socially awkward. People generally don’t know how to handle social awkwardness and so this has led Barbara to a lonely life of solitude. All she wants is to feel accepted. She wants friends. When she meets Diana, she sees what’s on the surface – confidence, charm, beauty – and believes those qualities to be the key to achieving all that she desires. She wishes upon the Dreamstone – a magical wish-granting artifact – to be like Diana. But the Dreamstone interprets wishes as it pleases and gives Barbara powers similar to those of Wonder Woman. Nothing is free, however, and the Dreamstone only gives if it is allowed to take, as well. And it takes all of the qualities that make Barbara the good person that she is.

Maxwell Lord only wants to be seen as a success by his son and to provide a happy and comfortable life for him, as well. Max’s history of being abused by his own father has instilled a determination in him to not become the man that ruined his childhood. He wants his own son to live a life with no worries or fears. It’s an unrealistic goal but an admirable one. So, when Max finally attains the Dreamstone, allowing the granting of any single wish, he is wise enough to know that one wish isn’t enough. So, he wishes to be the Dreamstone itself, rationalizing that he can gain what he wants and needs by granting the wishes of others. He is not a bad man. There’s no evil, here. He’s desperate and scared and he loves his son. But he doesn’t anticipate the Monkey’s Paw nature of the wishes he grants and he unintentionally becomes a far greater danger than his own father could have ever been.

Despite her physical abilities, Diana is just as human as anyone and she has her own wish: to be with Steve Trevor, once again. I was admittedly skeptical when I heard that Chris Pine was returning as Steve in this film. I loved him in the first movie but his sacrifice was so special that I was afraid it would be rendered meaningless. I was wrong. Yes, Steve is back, so to speak, but Diana’s wish comes at a cost, as well, as she begins to lose her powers. At the beginning of the film, we see a young Diana on the island of Themyscira attempt to cheat to win a competition by taking a shortcut in a race. She is caught by Antiope who tells her that “no true hero is born from lies”. If there’s anything I’ve personally taken from my lifetime of comic book reading, this is it. And it sticks with Diana as well.

When Maxwell’s wish-granting gets out of hand and starts causing real problems, Diana learns that there are two ways to stop him: for everyone to renounce their wishes or to kill Maxwell Lord. She resists this notion; she resists the idea that she either has to murder or to give up Steve. She wants her shortcut. But as her powers wane, she and Steve both come to understand that there is no shortcut and that the granted wishes are also lies. And no heroes are born from lies. So, with Steve’s approval, she does the unthinkable and renounces her wish. Not only does Steve get another moment here, as he sacrifices himself for the greater good for a second time, but Diana gives up the only thing she ever wanted for herself in order to help everyone else. It’s the pinnacle of selflessness and will lead to a lifetime of sadness for her – a lifetime that will last far longer than yours or mine. So, Steve had to come back for this film because Diana had to make a sacrifice. And there is no sacrifice for her on a personal level besides the love she shared with Steve. When I understood that, I knew his return was worth it for the story.

When she finally confronts Maxwell at the climax of the film, her recently returned powers aren’t enough. That’s when she uses her true gift: her humanity. She pleads with the world to renounce their wishes. She knows it’s an impossible ask, but she appeals to the humanity that she has always believed in, and she isn’t asking them to do something she hasn’t already done (another reason it had to be Steve). And they do it. Or at least enough of them do it to make Maxwell’s plan worthless. They believed in her the way she believed in them. All that was left was to stop Maxwell, himself. And she does that too. But not with fists. Not with a lasso. She does it with heart and with truth. He renounces his wish. She appeals to the good in him and she finds it. Someone like Maxwell Lord had to be the true “villain” of this film. It couldn’t be someone with fantastic powers. It had to be someone like you and me because the point is that we can all be good and selfless if we make the choice to be, even when it’s difficult. It’s not about powers. It’s about empathy and love.

This idea is reflected in Cheetah/Barbara, who wished to be like Diana, thinking that Diana was defined by her surface qualities. But we see what happens with the physical powers but without the heart and soul of Diana. Wonder Woman is not the hero. Diana of Themyscira is the hero. If you want to be like Diana, you don’t need to wish on a stone. You just need to approach people with love.

I’m not saying the film is 100% perfect. I do think Steve’s return was needlessly complicated (why not just return him in his own body? That had nothing to do with a sacrifice.). I’ve seen a complaint or two about pacing, but I’m not on board with that. There’s a long span with no action, but my attention span allows me to focus on things like dialogue and characterization. There are plenty of Michael Bay films to stream if that’s not your bag. But even with any perceived flaws, the end result far outweighs them. I was so touched by Diana’s sacrifices and her refusal to give up on people that it brought me to tears. It also reminded me that I might have lost a bit of that in myself, this year. We needed to be reminded that fighting and lying and anger never solve anything. Empathy, compassion, and love get the job done. And Diana lives by example, sacrificing to the highest degree and never giving up on us. If that helps one person not give up on someone, then that accomplished something real that another fight scene never could. Diana is the standard bearer for what a hero is. She wins with heart. And we all have her inside of us. So don’t give up on people or yourself. Renounce your wish. You’ll get something better in return.