How far John Krasinski has come since his breakout role as Jim Halpert in NBC’s “The Office” . . .!  Once an inexperienced actor who seemed destined to spend a career being typecast as the accessible everyman, Krasinski now finds himself as not only a versatile leading man, but a director, as well.  A Quiet Place marks Krasinski’s second time behind the camera for a theatrical motion picture and it’s unquestionably his highest-profile project, yet.  Entering into the horror genre and starring alongside his real-life wife Emily Blunt, Krasinski relishes this opportunity to show off his talent and versatility while terrorizing his audience along the way.

Like most good horror movies, the premise of A Quiet Place is a simple one: mysterious and deadly creatures have inexplicably arrived and, though blind, they have exceptional hearing and hunt entirely by sound.  Even conversing in a normal speaking voice can be enough to draw them out and lead to a swift and brutal death for the perpetrator.  Husband and wife Lee and Evelyn (Krasinski and Blunt) must do what they can to protect themselves and their young children and find a way to outlast the monsters and survive this menace that poses a threat to the entire human race.

The film has generated buzz with its early 100% score on Rotten Tomatoes (now down to 97% – it’s no Paddington 2!) and effective marketing campaign.  My screening was unusually crowded for my local theater and, from what I could tell, they actually all seemed to be engaged and attentive.  (Though if their own lives depended upon them being quiet, most of them wouldn’t survive for the length of a La La Land Best Picture win.  The girl to my left couldn’t figure out how to chew her popcorn with her mouth closed and the guy on my right found it absolutely necessary to punctuate each swig of his drink with an expressive lip smack followed by an exclamatory, “AHHHHHHH!”)  This one seems poised to be a big hit, and I hope that it is, as 2018 needs an undeniable box office success story that isn’t Black Panther.

In the face of all of this, I walked away feeling underwhelmed.  Some will want to suggest that my expectations were unfairly high due to that Rotten Tomatoes score, but I don’t succumb to that sort of self-manipulation and certainly don’t let Rotten Tomatoes tell me what to think like many others do.  While I hoped and somewhat expected to love the film, I’m also aware that anything is possible and resist making up my mind until after I see a film.  Crazy notion, I know.

I didn’t exactly hate the film, either, though.  Blunt, Krasinski, and the cast of kids all give exceptional performances that truly sell the danger of the world they live in while finding a balance with their need to attempt to live as normal a life as they can.  A normal life (whatever that means) isn’t exactly possible, but to cease trying is to give up, and this family is determined to never give up.  The suspense and tension build nicely and, combined with a family that is easy to invest in, the film has no problem hooking the viewer and keeping them interested for the entire ride.  Krasinski also has a good eye and can frame a shot in such a way that it contributes to the clarity of the storytelling and allows the performances to breathe.

Unfortunately, I was frequently taken out of the film by a startling lack of attention to detail.  For example, while there are ambient noises throughout the movie, there aren’t enough of them.  Noises that would exist in reality – and would often be loud enough to potentially attract attention – are conveniently absent from the proceedings.  Even though the family lives in an old cabin, the floors don’t creak.  The doors don’t squeak.  The joints don’t pop.  And what about when someone gets sick?  Or uses the bathroom?  Or sneezes?  Or coughs?  These seem like minor nitpicks, but they fly in the face of the entire premise of the narrative and need to be addressed.  And there is one more issue that I can’t discuss in detail because it would be a major spoiler but be aware that I was screaming inside my head and demanding an explanation.  How has this family survived these issues as long as they have?  In reality, they wouldn’t. 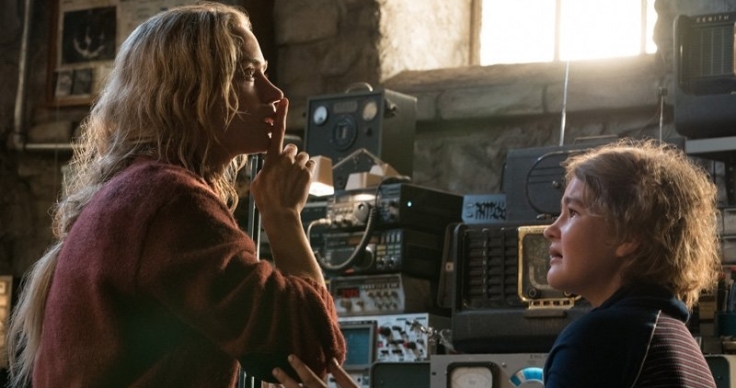 Then, there are the creatures.  The designs are excellent, if reminiscent of other classic movie monsters, but there are more conceptual issues at hand.  The creatures are blind, yet they seem to navigate remarkably well.  There is never a mention of echolocation or any other sort of sound-based movement, and if that were something to be aware of, there would need to be.  Is it possible that the creatures are familiar enough with their environment that they have it memorized?  Not really, no, but let’s pretend for a moment that it is.  How is it, then, that the creatures still maneuver without difficulty when introduced to a new location?  There are more problems worth mentioning, but as with some of the others above, only after seeing the film in order to avoid spoilers.

I can hear some of you.  “It’s not real!  You can buy the existence of monsters but not that a floor doesn’t creak?”  Well, yes.  The entire premise is that this story takes place in our world after these monsters have appeared.  And, in our world, old floors creak.  Loudly.  These would be important issues to address and resolve if one wanted to survive.  But here, they’re ignored in the hopes that the audience just won’t think that hard.  I’ll repeat – these aren’t nitpicks.  Nitpicks are tiny criticisms that aren’t truly relevant to the plot or structure of the film and are more based on personal preference.  What I’m discussing are inherent problems with the film’s entire premise.

I know I’m coming across as having intensely disliked the film.  I didn’t.  But I did intensely dislike the flaws as they kept me from loving a film that had great potential.  I have had a couple of story ideas that I, myself, have never put to paper because I haven’t been able to fully work out issues such as these.  Maybe I should do it, anyway, as clearly it’s not an automatic barrier to success.  But I have higher standards for myself than that, just as I did for this film.  It’s a film that I wanted to love but only kind of liked, instead, so I’m frustrated by the disappointment – especially seeing how needless it is.

Despite my mixed-negative review, I sincerely hope everyone else loves A Quiet Place and that it does well.  I’m a fan of the talent involved (Blunt has gradually become one of my favorites), I’m a fan of the genre, and I’m a fan of ambitious ideas, even when they aren’t flawlessly executed.  If you’re excited for this one, don’t let me or anyone else stop you.  (But see Ready Player One first.)

3 thoughts on “Review – A Quiet Place”