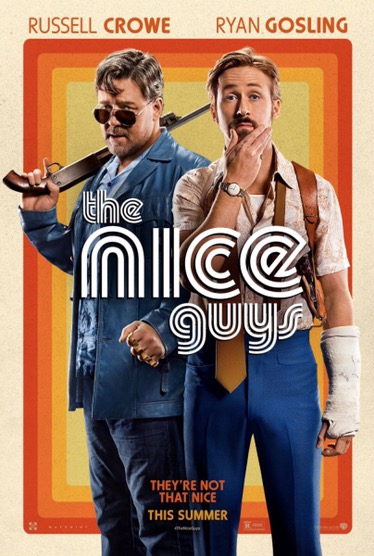 To make things worse, the last time director Shane Black made a film was Iron Man 3.  It wasn’t a horrible movie but I wasn’t crazy about it and it sits comfortably as my second-to-least favorite Marvel Cinematic Universe film (ahead of only Iron Man 2).

So, congrats to the marketing team behind this movie for getting me to buy a ticket.  They had an uphill battle but they won me over with the genuinely funny trailers and TV spots.

And then the movie won me over with the movie.  The short of it is that The Nice Guys is an uproarious concussion blast of entertainment from dawn til dusk.

I want to throw extra attention towards Ryan Gosling.  I’ve always liked him but his performance as March is easily my favorite of his career.  His comedic timing and delivery is flawless and unrelentingly effective.  At times, he even reminds me of classic Tim Conway, which is a huge compliment.  But he never fully crosses over into parody (so, he doesn’t go Full Conway, I suppose) and remains earnest and heartfelt with his presentation throughout the lighthearted and the more grounded moments, too.  It’s impossible to not enjoy his performance.

The story is an unfolding mystery (which I like) and it all works and makes sense.  It’s fun and never takes away from the film’s jovial tone, despite the seriousness of the events.  At one point, I believed the story was about to take a clichéd turn but was pleased when the thread that I assumed was about to take up the rest of the film played out by the end of the scene.  It never becomes transparent or predictable and it never distracts from the characters, which is where the picture truly shines.

As with most films, it isn’t perfect.  One could nitpick.  But why?  Why suck the joy out of something so unequivocally joyful?  Just to come off as holier-than-thou and supposedly smarter than the filmmakers?  The flaws are tiny and harmless and not even worth discussing.

And transcend The Nice Guys does.  You did it, Shane Black!  You won me back!  I’ll be there for your next film and for each one after that, as long as you keep putting out movies like this one.  I’m glad I didn’t allow my biases and preconceived notions keep me away from The Nice Guys.  And I’m also grateful to that marketing department.  Thanks for looking out for me!  See you, next time!