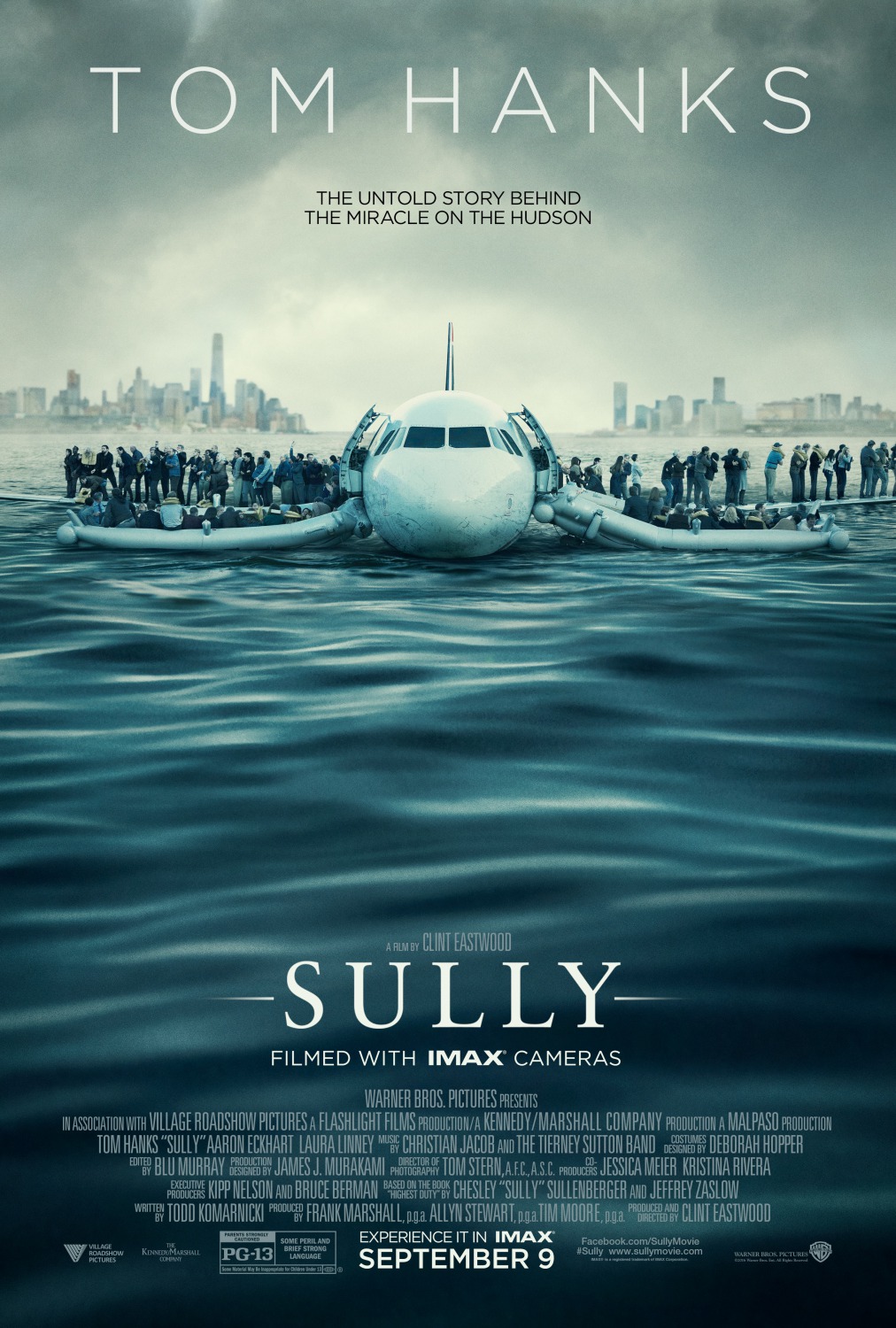 Sully is Clint Eastwood’s first film since the disaster that was American Sniper.  I don’t care how much money it made.  I don’t care what awards it was nominated for (and usually lost).  Many viewers got caught up in fabricated “patriotism” and entirely overlooked what a mess of a film it actually was.  Bradley Cooper gave a great performance, but other than that, it was a film full of creepy fake babies, muddled messages that were entirely misinterpreted by audiences, and the apotheosis of a racist, murder-craving lunatic who cared more about killing people (because he liked it, not out of a sense of duty) than he did his own family.  This film followed some truly tremendous movies from Eastwood, including Unforgiven, Letters from Iwo Jima, Million Dollar Baby, Gran Torino, and Changeling.  So, the hope was there that Sniper was just an incredibly unfortunate anomaly and Sully would get Eastwood back on track.

On the flip side, we have Tom Hanks.  Now, Tom Hanks is easily my favorite actor of all-time, so I may be a little biased.  Except that I don’t think he’s amazing because he’s my favorite; he’s my favorite because he’s amazing.  He can do anything and he can do it consistently well, with a casual ease that defies logic.  Lately, some people have frequently accused Hanks of just playing himself and phoning it in.  But, folks . . . while his roles have lacked some of the variety that we’ve seen from him in the past, he’s just so good that he makes it look easy.  Go back and watch Captain Phillips and then try to tell me with a straight face that he wasn’t snubbed out of not only an Oscar nomination but another win.  So, if Eastwood faltered again, I felt good knowing that I’d at least have Tom Hanks to get me through.

If you don’t know, Sully is the story of US Airways flight 1849, which was brought down in January of 2009 by birds (of all things) moments after takeoff, requiring Captain Chesney Sullenberger to think fast and act faster in order to save the lives of all 155 on board by landing safely in the Hudson River.  You almost certainly remember this happening (if you’re in America, at least) as it was a huge story at the time and made a celebrity out of “Sully”.

I waited until Saturday to see this one so I could make it to an IMAX theater.  I saw an IMAX trailer for it and it was beautiful.  Really, folks, any time you have the chance to catch a film in IMAX, whether it’s 3D or 2D, I urge you to go for it.  Not only are the picture and audio vastly improved, but the immersive atmosphere is unmatched.  Nobody seems to talk, pull out their phones, or be a disturbance when I go to an IMAX movie because the IMAX movie lives up to its reputation as being an experience.  Sully is no different.

As for the film, itself, I’m happy to say that Eastwood is (mostly) back to form.  He surprisingly works a fair bit of misdirection into the proceedings that can be a bit disorienting, but not in the same way as yesterday’s movie.  Instead, it serves to keep the viewer engaged by forcing them to regain their sense of awareness every twenty minutes, or so.  It’s an interesting technique but it works.

And for anyone worried about whether there is enough story to fill out a feature-length film, your fears are mostly unfounded.  The bulk of the narrative centers around the no-good-deed-goes-unpunished theme, as Sully’s choices during his (and that of his First Officer Jeff Skiles, endearingly portrayed by Aaron Eckhart) moment of crisis are questioned by an investigating committee.  Did he put all 155 lives in even more danger by choosing to touch down in the Hudson River, rather than heading back to LaGuardia Airport?

Going back to Tom Hanks, anyone who says he’s just “playing himself” is really exposing themselves and their lack of understanding regarding what actors actually do.  Okay, sure.  I guess if Tom Hanks has, at some point in his life, saved the lives of dozens of people, become a national hero, and then been made to feel as if he did something wrong by his superiors, then sure, he’s playing himself.  But if he’s lived that experience, I’ve never heard about it.  Please – PLEASE – correct me if I’m wrong.  Acting isn’t about having an accent.  Or playing a villain if you’re a real-life nice guy.  Or huge moments of exaggerated emotion.  It’s about the subtleties.  It’s about being natural.  It’s about conveying on the outside what’s going on on the inside.  And nobody does this better than Tom Hanks.  Nobody.  In Sully, Hanks gives us this man who wants to celebrate not only his own survival but the survival of 154 other people – including several of his friends – but is working to hide his crippling fear that his actions have ironically potentially ruined his own life.  That’s tough to pull off.  Unless you’re Tom Hanks.

The rest of the cast delivers, as well.  I mentioned Eckhart, but I also want to briefly note that there are a handful of others who are given only a few short minutes of screen time but use it to maximum effect.  Every single person reaches for that brass ring and takes advantage of their respective moment to shine.  I’ll let you discover them on your own.

You’re probably wondering about the Big Moment and how it plays out.  I don’t want to say too much, but it certainly carries weight and presents well on the big (especially IMAX-big) screen.  Eastwood makes two very puzzling choices regarding said Big Moment, however, one of which I’ll specify, and one of which I won’t.  When the crisis and then landing of US Airways flight 1849 occurs in the film, Eastwood makes the choice to show it in two parts, separated by an interlude.  As the first part unfolds, the terror of the experience takes hold and grips the audience with an unrelenting fist of intensity.  If one just hears the sentence, “A plane was forced to land in the river,” it’s easy to let it slide by without really taking into consideration how difficult, risky, and frightening that would be.  Successful water landings virtually never happen.  Here, that point is made with conviction.  But then it’s interrupted.  When we return to it, our brains understand the stakes and the accomplishment, but we’ve been taken out of the moment and not even IMAX can compensate for that interruption.

The second odd choice would be a bit of a spoiler, but you’ll definitely know it when you see it.  I know that Eastwood had clear, concise reasons for making these two choices, and I can hazard a guess at the second one.  But it would only be speculation and both choices totally disrupt the flow and the crescendo of the scene(s) in question.  These choices are nowhere near enough to ruin the film as a whole.  Not even close.  But it’s enough to keep it from reaching the heights of the other films that I mentioned earlier.  At least, it is if I’m speaking from a purely objective, intellectual perspective.  But, from a personal viewpoint . . ..

I have to say that the story of Sully resonates very deeply with me.  Much like I earlier assumed to be true of Tom Hanks, I’m not a hero.  I’ve never saved a life.  I would like to think if I was ever in a position to do so, I would react accordingly, the way we all would like to think we would react.  But we don’t know unless it happens.  So, that’s not what I relate to.

What I relate to is Sully’s post-incident struggles.  Like Sully, I do know what it’s like to go out of one’s way to help people – as many people as possible – and then to be vilified for it.  It happened to me at a past place of employment.  For years, I gave my heart, body, and soul to that place.  And then, one day, they repaid me by twisting my actions.  By making veiled accusations.  By suggesting that I wasn’t who I appeared to be.  But they had nothing concrete.  Some people there just wanted to tear me down and ruin my reputation.  Force me out.  But I stayed there.  I believed in my work.  I believed in what I was doing.  Others seemed to, as well.  So, I stayed.  For years.  Until, one day, we went our separate ways.

But if you’ve never been in that position, you can’t know how it feels.  You can’t know how it affects you.  You can’t know what it does to you.  It hurt.  Badly.  It hurt my heart and it hurt my soul.  It hurt that I gave my all to these people and, in return, they spit in my face.  And it still hurts.  I still carry it with me.  Every single day.  I work at a much better place, now.  A place where everybody is on the same team and has the same goals.  But I still carry around those other feelings and memories.  I won’t let people get close.  Especially other coworkers.  I have trouble trusting others.  I constantly second-guess myself.  My own judgement.  Even worse, my own intentions.  And I’m perpetually waiting for the other shoe to drop.  Some of that isn’t entirely due to those specific experiences at that other work place, but those experiences certainly inform them all, to a degree.

So, to anyone who maintains that Hanks is just “playing himself”, you can quite frankly shove it.  I saw that hurt in his eyes.  I heard it in his voice.  I saw a man who may never again feel at ease with himself or his own choices.  And if a character study on that man isn’t enough for you to fill out a feature-length film, then movies just aren’t for you.  Despite a couple of odd decisions by Eastwood at crucial moments, Sully accomplishes everything at which American Sniper failed.  Here, Eastwood delivers a story about a true hero who acted selflessly and saved lives, rather than took them for fun.  The message is clear and the technical aspects are more than up to par.  He might have tried to get a little too cutesy for his own good in terms of the editing and chronology, but all-in-all, Sully is powerful, riveting, and an important reminder that there are still good people out there in the real world and not only can we choose to celebrate them, but any one of us could be called upon to join their ranks at any time.  What would you do?  Maybe, one day, you’ll find out.  Until then, look to Sully for inspiration.