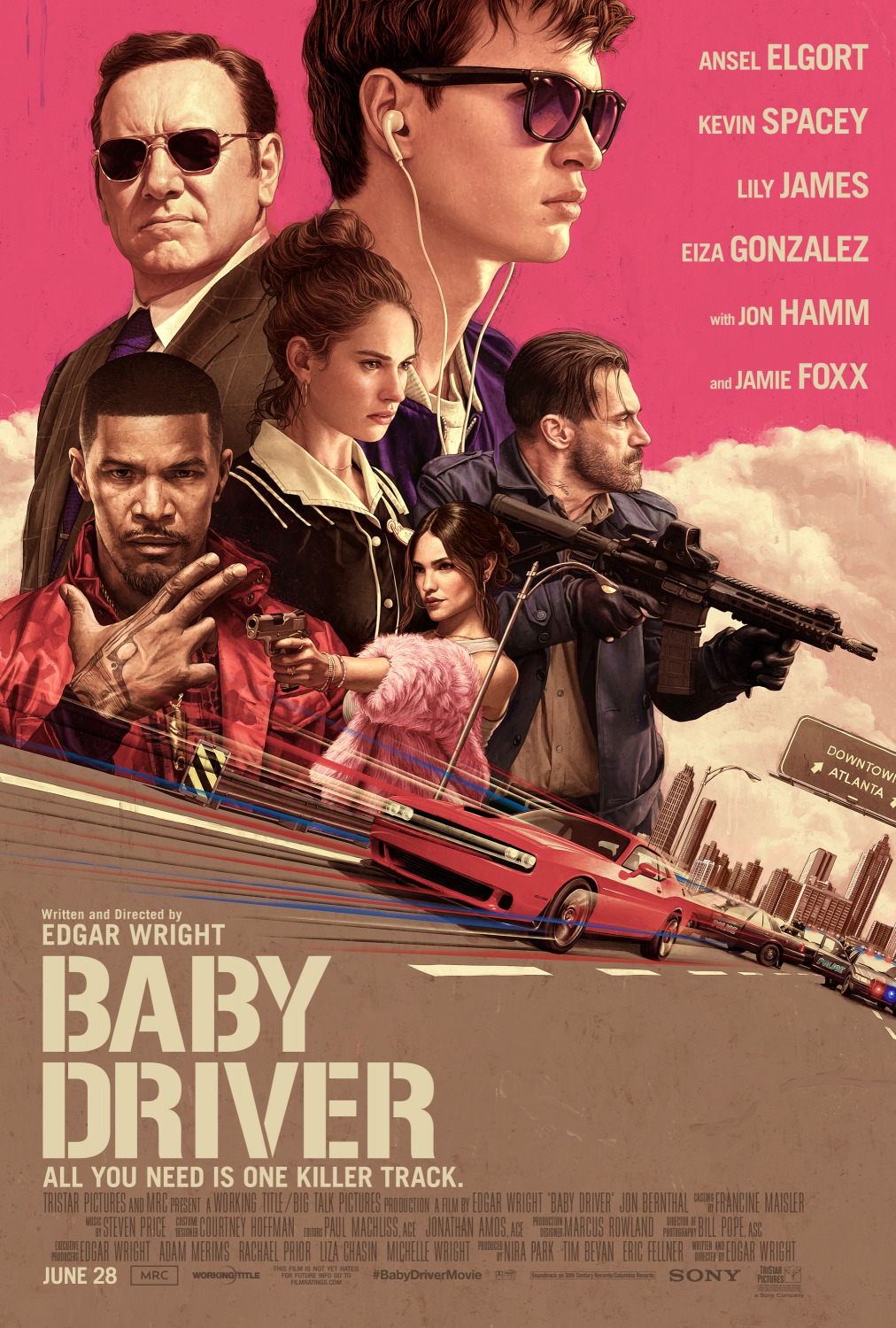 I have to be upfront: I’m not an Edgar Wright fan.  I hated Shaun of the Dead.  I hated Hot Fuzz even more.  You can read my thoughts on Scott Pilgrim vs. the World right here.  I rejoiced when he departed Ant-Man.  I have found his previous films to be devoid of virtually any intelligence, wit, charm, or thoughtfulness.  I wasn’t going to see Baby Driver.  But then the reviews hit.  And I’m not one to shy away from my own advice.  If so many people say it’s that good, I need to see it for myself and not just assume that I know everything.  Plus, while I’m not particularly an Edgar Wright fan, I am a fan of most of this movie’s cast.  So, I sat down, today, to give it a chance.

Baby (Ansel Elgort) is a getaway driver for a crime syndicate run by the villainous Doc (Kevin Spacey).  Having never been a part of the outfit by choice, Baby is further motivated to break away from his life of crime when he meets waitress Debora (Lily James, in her most charming performance, yet) at his favorite local diner and sees that there are options for a more pleasant – and less stressful – lifestyle.

I have to say that Baby Driver is undeniably kinetic.  The phrase “high-octane” is thrown around rather frequently when describing energetic films but, as clichéd as it is, it’s also apropos.  The chase scenes are thrilling and expertly staged, giving the film enough momentum on their own to carry the viewer from the first scene to the last.  Baby has a talent for driving and that talent gets copious time in the spotlight, ensuring that audiences get plenty of what most of them came to see.

Baby, himself, is also well-developed.  His motivations and judgment make perfect sense throughout the entirety of the film and, around all of the action and thrills, he’s given enough of a backstory to create audience investment in his plight.  However, despite that plight being competently conveyed, it’s also exceedingly derivative of another recent, immensely popular film.

There is no question that Wright gets many (most) of his ideas (inspiration?) from two contemporary films that are held in high-regard by film-lovers and general audiences alike: 2014’s Guardians of the Galaxy and 2011’s Drive.  The obvious parallel to draw between Baby Driver and Guardians is the use of music.  Just as Chris Pratt’s Peter Quill relies on music to keep him centered throughout his space-faring adventures with the Guardians, Baby does the same.  As a result, it’s not just that the films both use music to engage the audience; they also work said music into the narrative in the exact same way – as an emotional tool for the primary protagonist.  But that’s not all.  Baby and Peter also have very similar backstories, making them practically the same character.

From there, the comparisons between Baby Driver and Drive are easy enough to make and are more obvious on the surface.  But they just aren’t both about getaway drivers; both stories are practically identical.  Of course, details are different – little things here and there.  But the overarching narratives are the same, as if there’s only one story to be told about getaway drivers.  So, essentially, Baby’s inspiration is reflective of Peter Quill’s and his motivation reflective of Ryan Gosling’s nameless driver.

In fact, there’s nary an original idea – or even an original application of an idea – to be found in Baby Driver.  Even some of the less well-conceived ones – such as the inorganic relationship between Baby and Debora (as in Titanic) are hallmarks of films from years ago.  And there are far too many instances of illogical narrative devices, dei ex machina, and things that are done simply to look cool, even if they make no sense.  Baby Driver is the indie wrestling of film; as long as it looks cool, it’s awesome.  I don’t subscribe to that theory.  There need to be underlying rules of the world that ground the movie, in some way.  This film supposedly takes place in the real world – our world – but people don’t always talk or behave in the way these characters do, nor can they conveniently survive the things these characters do as a result of choices made by Wright just to make things exciting.  And I can accept one or two happy coincidences in a film – maybe even three – but the six or seven that Wright throws at us over the course of Baby Driver are just too much.

Wright hasn’t exactly won me over with Baby Driver, but I can concede that the film has its pros and is his best film to date.  The cast does their part with great success and the Baby character is well-conceived and -executed.  The action is frenetic and satisfying, but there are still issues that keep the film from truly being outstanding on all fronts.  For some reason, though, apologists “overlook” these things when Edgar Wright is at the helm, yet jump all over someone like Michael Bay for the exact same transgressions.  Still, people mostly won’t care about the movie’s issues and will enjoy it, anyway, which is fine.  I like when people enjoy movies and I still hope the film does well (and it has, so far).  It has a great cast and plenty of cool moments, even if the core foundation of the film – the script – is on shaky ground.  It’s certainly an example of style over substance but even I have to admit that it’s quite a style.