From director Patrick Hughes (The Expendables 3) comes the new action-comedy The Hitman’s Bodyguard.  Starring Samuel L. Jackson and a recently-revitalized Ryan Reynolds, The Hitman’s Bodyguard follows the exploits of bodyguard Michael Bryce (Reynolds) as he must ensure that renowned hitman Darius Kincaid (Jackson) makes it to the International Court of Justice in order to testify against notorious criminal Vladislav Dukhovich (Gary Oldman).  Tensions erupt between Bryce and Kincaid and, naturally, hilarity ensues.  At least, theoretically.

Again, as I always say, mileage varies on various stylings of comedy and this film will be no exception.  I do feel confident in saying that the film is not as much of a comedy as the marketing would have everyone believe.  All of the humor stems entirely from the conflict between the characters represented by Reynolds and Jackson.  It’s completely situational and devoid of any silly gags or poor attempts at wit.  Reynolds gets off a number of successful zingers (with flawless delivery, as always) while Jackson provides more character-driven humor, which is right up his alley.  The movie isn’t the funniest of the year, or anything, but I certainly laughed on multiple occasions, even if it wasn’t exactly the outright spoof that has been suggested by the trailers and the poster.

The cast mostly does well with the material they are handed, and they are the best component of The Hitman’s Bodyguard.  I was pleased to see Elodie Yung (Daredevil, The Defenders) in another prominent role and hope that her star continues to rise.  She, Jackson, and Reynolds all exhibit undeniable charisma and chemistry, elevating the film above its script as much as can be expected.  Salma Hayek has less screen time than the others but gives a memorable performance – perhaps the most memorable.  Gary Oldman is the only one who seems to phone it in, a bit.  He doesn’t exactly do a poor job as the Belarussian crime lord but he shows signs of disinterest (such as pronouncing the word “charade” two different ways  in his accent within 30 seconds of each other).

The biggest issue with The Hitman’s Bodyguard is that it brings nothing new to the table.  Even though, as I mentioned, the cast makes the film better than it is on paper, they can only do so much.  For the most part, the story, the action, and the character relationships and dynamics are stereotypical for this type of buddy/action film.  It’s tempting to suggest that the Reynolds/Jackson relationship is something new, but – while the specifics of their relationship are unique and their interactions are enjoyable – it’s really not altogether dissimilar from what we’ve seen in films such as Rush Hour and Lethal Weapon.  A strong cast can do nothing to improve upon an uninspired story. 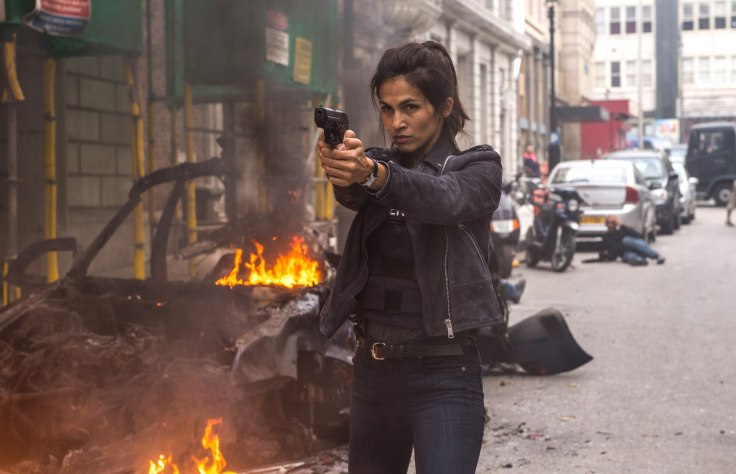 The action suffers from the same issue.  As well-staged and executed as they are, there is nothing particularly distinctive or imaginative about the action set pieces.  There’s an exorbitantly succinct fight inside an industrial kitchen involving Reynolds that was rather fun, but that’s about it.  Outside of that, it’s the exact same routine gunplay and car chases that we’ve seen a multitude of times without anything to compound the excitement or throw an unexpected twist in the audience’s direction.

The generic (and rather distracting) score doesn’t help matters.  In fact, I argue that the music actually hurts the film by making it feel antiquated and low-budget by recycling the same types of riffs, chords, arrangements, and leitmotifs that have been employed in the straightforward action film genre for decades.  And this isn’t a stylistic creative choice with a definitive purpose such as with the excellent Atomic Blonde.  In that case, the idea was to make a film set in the eighties that is simultaneously evocative of films made in the eighties.  In the instance of The Hitman’s Bodyguard, the music just comes off as cheap and lazy, as if the producers couldn’t afford an experienced and visionary composer.

What this all amounts to is that The Hitman’s Bodyguard is . . . fine.  The cast is strong, the music is detrimentally weak, and everything else is acceptable but unspectacular.  But, with so many truly great films out there, right now (go out of your way for A Ghost Story, Wind River, and the previously-mentioned Atomic Blonde), that’s just not enough.  The good news is that the film only cost $30,000,000 (so maybe Lionsgate actually couldn’t afford a composer) and has a good chance of making a profit by being a mediocre distraction.  But if people are complaining about the supposed “lack of originality” in Hollywood and then summarily choose movies like The Hitman’s Bodyguard over Wind River or A Ghost Story, then they only have themselves to blame.  The film is adequately entertaining, but don’t expect anything more than that.