Here we have another #ThrowbackThursday film that I saw only once, shortly after its release.  This one might as well be new to me, as any significant memory of what I saw has been forced out of my brain by eighteen additional years of watching thousands of other films.  People still talk about this movie, though, so I wanted to do a revisit and thought it would be a fun addition to the #ThrowbackThursday archives at the same time.  After all, this is the film that put Christian Bale on the map and ultimately led to him portraying Batman in the most popular and successful incarnation of the character to date (see my Batman Begins #ThrowbackThursday here), so there’s some historical significance here, as well.

Directed by Mary Herron, American Psycho is a bit of an odd duck.  On the surface, the story is simple: Wall Street banker Patrick Bateman (Bale) has spent a lifetime suppressing his murderous urges but they have now reached the point where they can no longer be contained.  He lets loose on a killing spree while maintaining his dual life and continuing his lifelong masquerade as a more straightforward non-homicidal a-hole.  But, underneath that surface, things get significantly more complex. 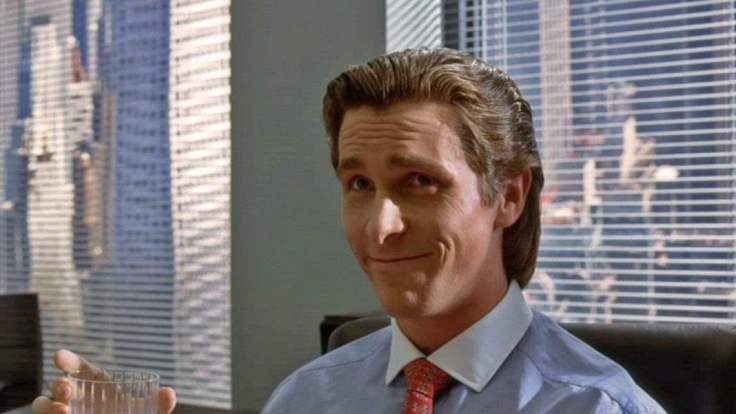 The entire film plays as though it exists in some alternate, heightened reality, with Herron clearly being inspired by the work of David Lynch and/or Darren Aronofsky.  Characters don’t behave or speak like real people, events don’t play out in a logical fashion, and absolutely nothing feels like it belongs in the world in which we all live.  Herron directs her actors to play everything as big and over-the-top.  There’s no subtlety to the performances.  Speaking tones and rhythms are unnatural.  No one takes the time to process or react to the words being spoken to them before they immediately respond at a rate far too quick to be authentic.  And it all actually comes across as being borderline comedic, which is hardly an appropriate tone to strike when considering the subject matter at hand.  Normally, this sort of performance drives me crazy.  I even recently pointed to this very thing as being the main barricade between myself and my unimpeded enjoyment of Wes Anderson’s films.  But I’m not so sure how I feel about it in American Psycho.

This particular characteristic of the film is unquestionably a result of Herron and not the cast.  The movie is populated by tremendous actors (Bale, Reese Witherspoon, Justin Theroux, Josh Lucas, Chloë Sevigny, Willem Dafoe) who aren’t guilty of this sort of performance in any of their other work, so it’s a deliberate and concentrated creative choice by Herron.  And for Bale’s Patrick Bateman character, it works.  He is, obviously, a narcissistic psychopath.  Bateman has no genuine emotions and must therefore try to approximate them to the best of his ability – and Bateman, as previously established, is a banker and not an actor.  But Bale is an actor and it’s no wonder that this role got him the recognition that it did.  He plays it as a bad actor who’s trying to convince the world around him that he’s something that he isn’t.  And it works, but only because he’s so full of bluster that everyone writes him off as nothing but talk and posturing.

As for the others, I’m of two minds about why Herron chose to direct them in the same way.  On one hand, a huge part of me suspects that she just yearned to complete the David Lynch vibe that she was clearly reaching for.  On the other hand, with the majority of the narrative being conveyed from the perspective of Bateman, it would make sense if that were the way that he saw the world, therefore making his efforts to mislead those around him with regards to his double life seem all the more convincing from his point of view.  If asked, Herron would probably claim the latter.  And who am I to argue?

Unsurprisingly, the film builds to a twist ending that also has trace elements of ambiguity.  None of that bothers me in and of itself, but it left me with a sense of dissatisfaction for this particular tale.  Bateman’s grip on reality is consistently called into question throughout the entire film and, when combined with the more lighthearted method of acting invoked by the cast, the ending diminishes the seriousness of Bateman’s actions and issues.  It’s actually very difficult to take the film seriously at many points and the climax does little to remedy that.

While I can appreciate aspects of the artistry at play in Herron’s American Psycho, and though Bale delivers a memorable breakthrough performance, ultimately, the film falls flat for me.  Herron refuses to find her own voice, instead opting to mimic the distinct style of others who came before, and the result is a mixed bag at best.  She includes the abstractness of Lynch and Aronofsky but without the nuance.  In addition, there is no joy to be found anywhere in these proceedings, yet it feels as though Herron believes otherwise, which is simply off-putting and disorienting.  To compound the issues, there are also no characters to root for or to latch onto.  It takes a stronger filmmaker than Herron to craft a compelling and emotionally rewarding film without a protagonist to serve as the audience’s anchor.  I know many people love this film, and I can respect that, but from my point of view, it’s mostly an inexperienced exercise in style over substance.