The Purge franchise is the best horror franchise going not named The Conjuring (read my reviews of part one here and part two here).  The original film established the unique premise with an otherwise fairly standard home invasion story.  But the seeds were planted and since then director-writer James DeMonaco has watered them and watched them grow.  The second installment, The Purge: Anarchy is easily my favorite of the series and actually sits as one of my favorite horror films of the last decade.  2016’s The Purge: Election Year (find that review here) wasn’t quite as strong but was still excellent and superior to the original film.  What sets this franchise apart from the rest is how traditional slasher horror is interwoven with stark political commentary.  DeMonaco and his films were way ahead of the curve regarding the direction in which America was heading and, in a world where more and more people miss the point of these films entirely and state that doing a real life Purge would be a great idea, it’s ever more and more clear that there are lessons to be learned from these films.

This fourth installment, a prequel picture entitled The First Purge, is the first one without DeMonaco in the director’s chair, though he still receives the sole writing credit.  Taking DeMonaco’s place behind the camera is Gerard McMurray in his sophomore directorial effort.  Also absent for the first time since the original film is star Frank Grillo, whose Sergeant Barnes character had begun to morph into the face of the franchise.  Stepping up as the new male lead is Y’lan Noel, who does a solid enough job to fill the void.  Meanwhile, McMurray had big shoes to fill, but, with DeMonaco’s support, he mostly pulls it off by crafting what is another thoughtful and relevant entry in the little franchise that could.

The First Purge is the . . . well . . . first Purge (sorry.  That’s the last time that happens, I promise.) to come along since the most recent American presidential election and some who aren’t up to speed will claim that its story is in direct response to that election’s outcome but, as I alluded to at the top, this series has been following this train of thought since the beginning, eerily predicting exactly where America was heading.  In this film, we get to see the New Founding Fathers political party take root, but they’ve been there since the beginning of the franchise, now explicitly described as an alternative to the Democratic and Republican parties, just as the party currently in power in America is often viewed, today, despite their self-declaration of falling under the Republican banner.

I wasn’t necessarily all that enthused to hear this chapter be announced as a prequel, as I’m more interested to see where the franchise feels society is going, compared to revisiting where we’ve been (or are).  But, after seeing it, it’s a story worth telling.  The film provides a deeper understanding as to how the country gets to the point that the Purge becomes a reality.  And, as a math teacher, I can tell you that nothing is fully understood without comprehending why it happens.

The cast is almost entirely made up of minorities, which is both appropriate and commendable considering the subject matter.  Some won’t be happy about this, just as they won’t be happy about the mirror that the film holds up to America, reflecting the way the country often pits minorities against each other and then uses that as an excuse to marginalize them.  But those complicit in such behaviors are the people that the movie is truly about, and they likely have no interest in the film, anyway.  For anyone else, it’s easy to enjoy the efforts of Noel, Lex Scott Davis, Joivan Wade, and the others as they portray frightened but willful characters striving to survive an onslaught from their own country – the country that is supposed to love and protect them.

The action and horror in the film is effective, though not quite as effective as in the previous films.  This is where McMurray’s inexperience shows, a bit, as many of the shots are too tight and too quick to have the desired impact.  When Noel’s character of Dmitri gets the opportunity to cut loose, however, things improve and the flaws from other sections of the film are forgotten.  All told, the action is slightly above average for this sort of film and the horror is right on par; it’s good but nothing special.  But the Purge series has always been more about subtext and allegory than its more-apparent surface qualities, so “good enough” is, indeed, good enough when there’s so much substance to fall back upon. 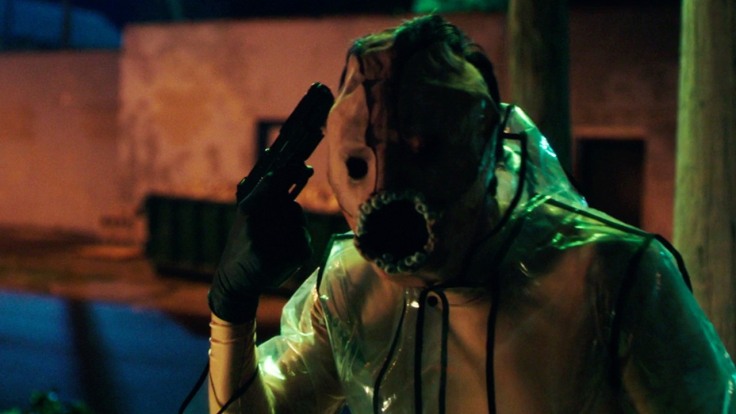 While not quite up to the level of the two previous entries in the series, The First Purge is a solid thriller wrapped tight in a political metaphor that’s far more terrifying than anything concocted within the world of fiction.  Though it’s not likely that the real world – including America – will ever literally see the Purge legally enacted, the film serves as a terrifying reminder of the mindset that gets a country to such a place: the money over mankind mindset.  It’s a mindset that is constantly gaining strength and, though the Purge probably (and hopefully) would never happen, society continues to inch ever closer to that precipice, and always with phony and hollow justifications at the ready.  The First Purge takes a stand and the opportunity to say that the battle isn’t over.